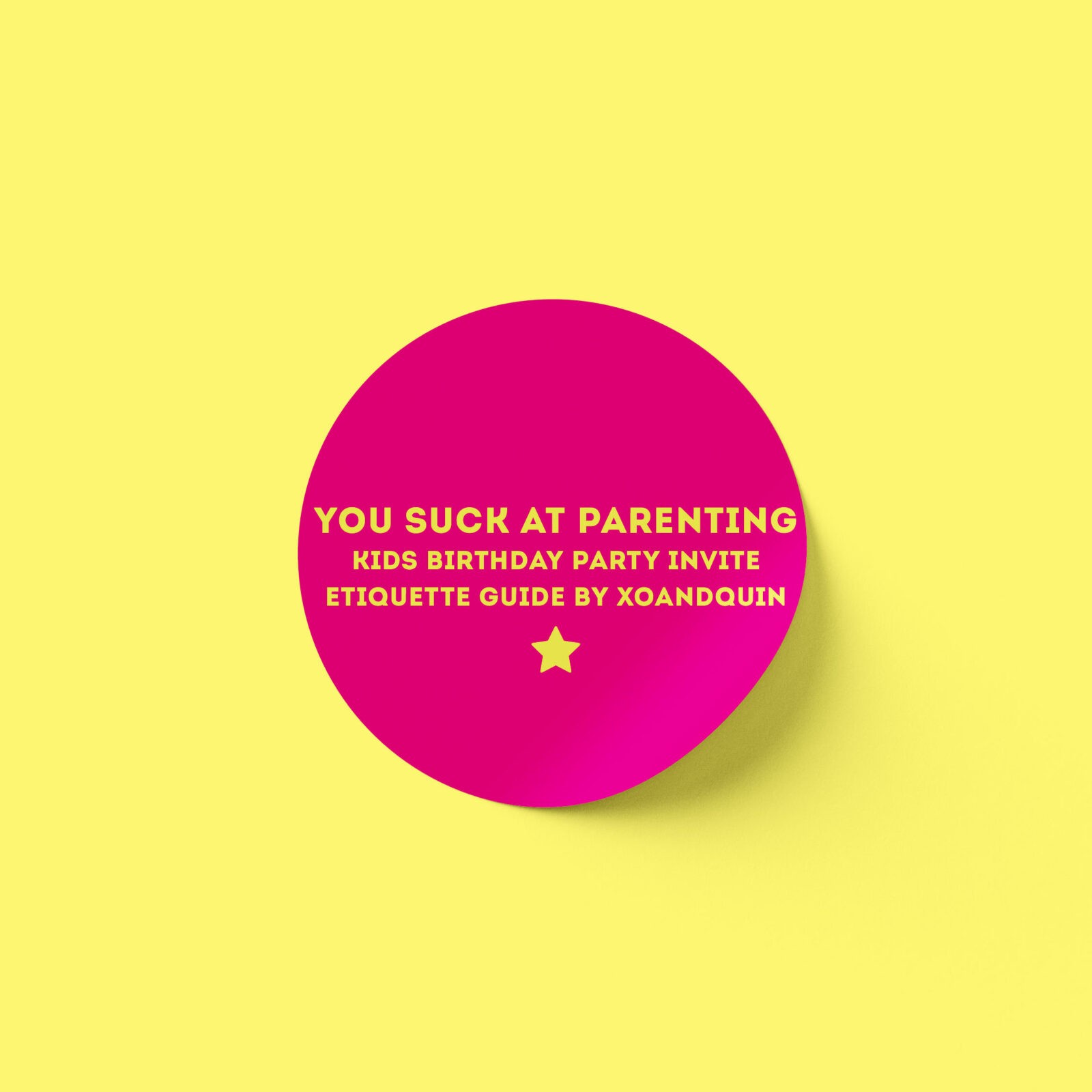 as life returns to normal, we thought we’d publish a guide to planning a kid’s birthday party, for the parents who missed out on two whole years of birthday party stress (fun i meant fun).

last year, Portia celebrated her third birthday, parents who came told us, it was their kids’ first experience of a birthday party – some of these kids were due to go into reception! some of our RSVPs tentatively asked if it was a drop off (maybe they’d watched motherland) but these kids were two, and the parents had never met us, so without further ado, we present to you the

rule 1: kids birthday party planning involves loads of shit and stress, if you’re not stressed, you’re doing it wrong. this is a fact

when they are little, depending on how many kids you actually want to turn up, consider planning around nap time (or not).

midday kids birthday parties are BAD – kids are hangry, you’ll need to feed them on arrival, all your carefully planned activities and schedule go to shit cus the kids eat everything in sight, or worse still, whine about being hungry, fill up on the snacks, whilst your carefully planned, balanced, healthy, bento-beautiful party food (to impress other parents) goes to waste.

10am kids parties, also BAD – nobody wants to wake up early and potentially leave the house at 9.30am on a saturday or sunday morning. this assumes you live in london where it only takes 10 mins to get to a venue from your house, and 20 mins to leave the house.

it’s also borderline unacceptable to drink at 10am (if you don’t know the parents that well). You also will run into the problem that at 11am, kids probably won’t eat the food that you provided and the parents are stuck feeding them on the way home, as any normal person will only run a 2 hour party, maximum.

3pm another BAD time to plan a kids birthday party party for – for the party planner, you need to get through the whole day telling your kid it’s not time for their party yet, it gives you a false sense of security knowing you have the morning to prep. so you don’t stay up all night making a cake that’s gonna be a pintrest fail, cus you have the whole morning and your kid will get you up at 5am because they know it’s the day of their party, you spend most of the day threatening to cancel their party if they don’t behave.

3pm still a BAD time – for the guest, you spend all day telling your kid they are going to their friend’s party. your kid wakes up at 5am because they are going to their friend’s party. you spend all day threatening to cancel taking them to their friend’s party if they don’t behave. by 3pm any self respecting parent want’s to be planning bed time at 6pm, just 3 hours away and having a drink on the sofa whilst watching encanto or something (not saying my kids go to bed at 6, just saying i send them to their rooms at 6 and pretend like I nailed the bed time routine, when they are just pissing about and I’m watching law and order or something)

4pm is even worse…don’t even go there

exception to the rule: 3pm can be acceptable, see below.

11am is a pretty good time for a kids birthday party – guests have enough time to get ready and have breakfast, snacks, post snack snacks and post post snack snacks. you probably require a maximum of 45 minutes of activities because they won’t start until like maybe 11.15am. If you’ve been smart and hired an entertainer, so you can begin drinking around 11.30.

2pm is also a good party time cus they’ve already eaten, so you probably don’t have to plan too many snacks, it is acceptable to be drinking when guests arrive. this is one of my favourite times. the 2-4pm party requires very little catering, kids won’t really eat much.

3pm (see above) also fine for older kids, but you’ll probably need to feed them some pizza or something beige before you serve the cake. if it’s a drop off or have given up and just want kids to eat, it’s fine, cus you don’t have any parents to impress. plus by around 6 or 7, most parents have cottoned on and are smart and opt for pizza.

things to include when writing a kids party invitation

ask yourself – how many kids realistically do you want trashing your house/provide for, some people, like me, have a 3, 6 and 9 year old. I would never inflict the 6+9 year old on a 3 year olds party, but not all parents might think this, it would probably be OK to bring a newborn, 1 and 3 year old to a one year olds birthday party in a park.so include a line

“siblings welcome” or something like “sorry no siblings”. make it blunt, don’t fluff.

is it a drop off?

back to motherland, this is important. most seasoned party goers sort of know, if your kid is say like 6 or over, it’s probably a drop off, but you need to specify it.”drop offs welcome” OR “please stay and enjoy a drink” (bribe them with alcohol) – see planning notes above.

it’s ALSO fine to say “drop offs are welcome” and include parameters, such as “drop offs welcome, but please make sure you’ve arranged with another parent who is staying to watch your child”

I recently turned up to a pizza express party, there was no mention of whether it was a drop off or not, because it was at pizza fucking express and it was a 7th birthday party. the mum in front of me, looked around and asked permission to drop off, well her actual words were “is it OK to leave my kid. I’ll be back at 1 (party end time)” – the mother never specified drop off, she was shooting parents who dared to leave their kids awful looks, loads of kids were there already on their own, running riot. literally running riot. I sort of stuck around for a bit then ran. it was awkward, not going to lie. the mum ahead of me is my idol, she knows how to not feel guilty.

include the timings clearly

this may feel ‘dumb’ but last thing you want is for a kid to turn up and not be able to have the good stuff, some parents are fine telling their kids no (some kids are used to it), but it’s nice to offer something if possible, also the last thing you want, if it’s a drop off, is a kid having some sort of allergic reaction at your party, who even has time for that?!

there’s a parent on my circuit, who has a kid with allergies, and he replicates whatever everyone else is having, with a free from version of his own for his kid. there’s another parent on my circuit, who claims her kid is allergic to sugar, I once witnessed him holding a chip up at his mother and asking if he could have it, she mouthed “one” at him, he ate one chip the whole party, he later bit another child, he was no doubt hangry – the mother has never actually disclosed what he IS allowed to eat. we also have parents on the circuit, who just tell their kid what they can and can’t eat out of the selection put out, and brings spare food, just in case

if you’re the parent of a kid with allergies and/or intolerances, when accepting invites, consider disclosing to the hosts and offering to bring something for your child, so the host doesn’t have to worry about it. don’t be a dickhead and take your kid to a pizza express party, then disclose they have a dairy and gluten allergy.

some (most) venues require rsvps to book, and you will pay per head in advance. the most widely acceptable and recommended notification time for a party is around one month (3 weekends in advance). you may request RSVPs up to 3 weekends in advance to book the damn thing.

it is acceptable to use a parents group whatsapp to gauge interest/child’s popularity/if people are gonna just drop off whether your kid and their kid get on because it’s a drop off and you’re in essence providing free child care in return for a piece of crappy plastic (we have a guide on gifting).

you can also hand out generic invites to the whole class (if this is your chosen method of communication) with your number or email address on it.

level 42 parenting pro tip: it is highly recommended you do not include one piece of key information, e.g. timings or location on the invite. this is so people have to RSVP, to get the vital piece of info, and not just turn up on the fucking day. this way you don’t get extras turning up on the day. extra kids are BAD, kids without party bags kick off, no matter how old they are (yeah we will have a party bag post too).

make sure you include a date to RSVP by, because technically if you said RSVP and they RSVP the morning of the party, they still rsvp’d.

RSVPs are important, as you will need to contact parents the week before the party, especially if you have chosen to go to a trampoline park or something that requires parents to fill in waivers (yes, this is a thing). people also forget, people turn up at the wrong time, people forget the specifics. add important rules as the main image of the whatsapp group, and include ALL specifics in the group details.

Categories: all blog posts, you suck at parenting

xoandquin is also available on